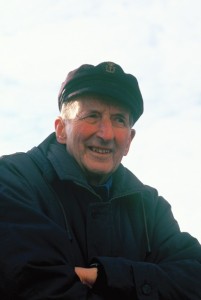 It was with deep regret that I have to let you know that Charles died on 11 April 2016. He was 95 years old and although declining physically over the last month of his life he remained alert and in full control of his mind to the end. He was last on Positive Thinking on 26 November when we enjoyed a coffee, a good chat about jobs to do on PT, 40 winks, a pot of tea and then home to Chichester. It was always an enjoyable outing with Charles. We have shared PT since 1989

Charles was a member of the Dufour Association for 30 years. He was Editor of our magazine and Secretary for many years. If he was short of copy he would dash off a suitable sailing article to fill the space. A successful editor and writer.

Charles served as a Naval officer in the 2nd World War including the North Atlantic Patrol for which he awarded the Atlantic Star. He also spent time in Bermuda and happily survived this conflict.

An electrical Engineer AMIEE with a varied and successful career living in the North the East and the South of England much of his time connected with the electrical side of aeronautical matters.

I first met Charles at the Little Ship Club in London about 35 years ago and we have sailed together ever since. Firstly on his Trident named Trilby and then a Dufour 28 named Deidi and for the last 27 years we have shared our Dufour 31 Positive Thinking. We enjoyed many Dufour rallies in the Solent, France and Weymouth over two decades.

We have had some great times together on Positive Thinking sailing and perhaps our biggest adventure was to take part in the Yachting Monthly Triangle Race. It started from Torquay then to Crosshaven in Southern Ireland then we sailed to Tregiere in France and then back to Torquay. Happy days.

Universal Yachting have been appointed as Dufour Yacht Dealers in the South Coast. They have branches in Solent, Chichester Harbour and Portsmouth areas. Contact Chris Warwick at Universal Yachting for full details of what they can offer

They will be able to serve current Dufour owners and represent the Dufour brand for new prospective owners.

This website uses cookies to improve your experience while you navigate through the website. Out of these, the cookies that are categorized as necessary are stored on your browser as they are essential for the working of basic functionalities of the website. We also use third-party cookies that help us analyze and understand how you use this website. These cookies will be stored in your browser only with your consent. You also have the option to opt-out of these cookies. But opting out of some of these cookies may affect your browsing experience.
Necessary Always Enabled

Any cookies that may not be particularly necessary for the website to function and is used specifically to collect user personal data via analytics, ads, other embedded contents are termed as non-necessary cookies. It is mandatory to procure user consent prior to running these cookies on your website.